Two of the funniest shows on television are about to collide, thanks to Ben Schwartz.
The actor (Jean-Ralphio on Parks and Recreation, along with Clyde on Showtime's House of Lies) will appear in multiple episode of Arrested Development Season 4.

His role is unknown at this time, but it's pretty much impossible to go wrong here.

Along with Schwartz, those new to the return of this comedy on Netflix will include John Slattery, Isla Fisher and Terry Crews; while returning plays range from Ron Howard to Judy Greer to Henry Winkler.

Adam Scott and his wife Naomi, a former Jimmy Kimmel Live! producer, are getting into business together.

The pair has launched Gettin' Rad Productions, a name that is “both stupid and aspirational,” according to the Parks and Recreation star. Their first project, a 15-minute special titled The Greatest Event in Television History, aired Oct. 11 on Adult Swim and quickly went viral. Through GRP, the Scotts have plans to produce at least three more specials in a similar vein for the cable network.

The idea was born out of an e-mail exchange between Hamm and Scott in which the two were sending credit sequences from different shows back and forth. “We e-mailed each other Simon & Simon at the exact same time, and I said, ‘We should do a shot-for-shot remake of this,’ and he was like, ‘Yeah, totally,’ ” recalls Scott. Unbeknownst to Hamm, Scott and his wife pitched the remake idea to Adult Swim’s then-head Nick Weidenfeld, who bit. “I had to call Jon up and say, ‘Hey, remember that sort of conversation we were having when you said you would want to do this? How about we actually do it?’ ”

The Scotts say they have yet to decide which TV credit sequences to tackle next but are actively searching for ideas. Of interest are series that haven’t been heavily tread upon. To hear him tell it, that was one of the big appeals of taking on the now-semi-obscure Simon & Simon. He adds, “That and it was a boyhood fantasy of mine to do that tumble in the grass and fire a gun.” The special garnered a 1.4 rating among the 18-34 demo in its midnight time slot, performing particularly well with Adult Swim's younger male target.

Looking ahead, the Scotts, who are big TV watchers and parents of two young kids, are eager to explore other television ideas in comedy and reality, too, though she shoots down any plans to turn the camera on themselves. “We’re terribly boring. That would never work,” Naomi Scott quips of a Scotts-centered reality show.

Over on the big screen, their GRP has optioned Chuck Klosterman’s first novel, Downtown Owl, with Oren Uziel (The Kitchen Sink) attached to write it. “It’s lovely and moving and funny,” says Adam Scott, noting that he has been a fan of Klosterman’s work for some time. "We just thought it’s a really great story about people that I relate to but also small enough that it would make a good first film out of the gate for us."

GRP is repped by WME and attorney Wendy Heller; Adam Scott, whose upcoming film credits include The Guilt Trip, A.C.O.D. and The Secret Life of Walter Mitty, is also repped by Untitled for acting.

Scott also told THR about the humble beginnings of the "Simon & Simon" remake idea. He and Hamm were emailing each other classic TV intros: “We e-mailed each other 'Simon & Simon' at the exact same time, and I said, ‘We should do a shot-for-shot remake of this,’ and he was like, ‘Yeah, totally.’”

Hamm put the special in perspective in an interview with Vulture. “Over four days, we did this insanely ambitious, ultimately pointless thing that I think is really funny and weird."

Which classic TV show introductions would you like to see Scott & co. recreate next? Let us know in the comments.

From SNL‘s “Weekend Update” to Baby Mama, the Fey/Poehler pairing is a proven comedy goldmine, so this seems like a no-brainer choice if producers are aiming for a bunch of laughs and a good time. And given the freewheeling (read: alcohol-friendly) atmosphere of the Golden Globes, the ladies of NBC should have a wealth of material to work with as the night goes on.

The Globes will air January 13, with nominations coming one month prior.

Oh, and if you still have your doubts about Fey and Poehler, remember one thing:

Shrouded in mystery, the Adult Swim program promises it will blow the minds of every single viewer. 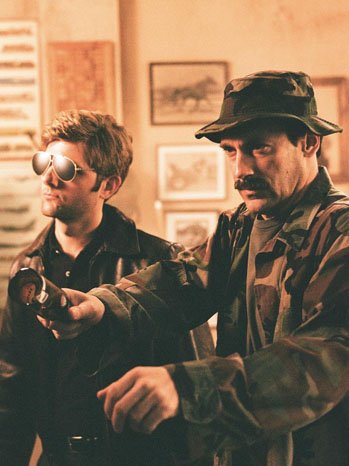 What is The Greatest Even in Television History? More importantly, with a name like that, does it even matter?

Parks and Recreation star Adam Scott has used Twitter to tantalize his loyal following with the occasional, beautifully composed still photo of himself and good pal (and Friends With Kids co-star) Jon Hamm, with each shot featuring the pair decked out in some sort of high-class garb and facial hair. But still, mysteries abound.

There has been little-to-no explanation of what he is teasing; all we know for now is that, for 15 minutes, starting at midnight, the pair will recreate some sort of classic television moment, adding an extra dash of handsome to boot.

What moment could it be? Judging from the mustaches, perhaps something from Magnum P.I. Or maybe, from the looks of this photo, they're recreating M*A*S*H in someone's home?

Tune in to Adult Swim, home of such seminal series as Children's Hospital, at midnight on Thursday to find out. 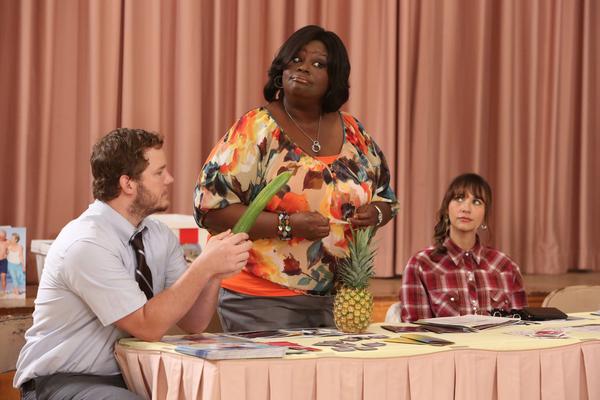 “Sex Education” with Donna… this #ParksandRec picture really just says it all: twitter.com/parksandrecnbc… 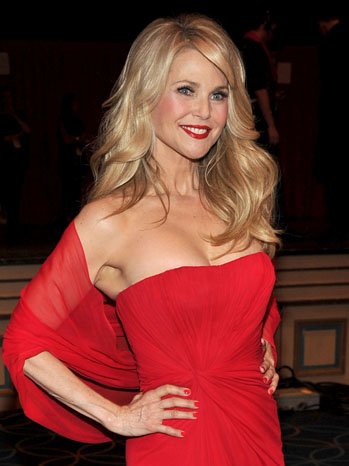 Jerry's wife is dropping by Parks and Recreation.

Christie Brinkley has been cast as Jerry's often-mentioned significant other, Gayle, on the NBC comedy, The Hollywood Reporter has confirmed.

The model and actress will appear in an upcoming episode of the season five, titled "Ron and Diane."
Brinkley, who starred in Broadway's Chicago production, appeared in TV's Ugly Betty in 2009 and the 2011 Adam Sandler feature Jack and Jill.

It's as if Tammy 2's ears were ringing! Just as Ron Swanson has found a possible new love interest, she comes back to Parks and Recreation!

Megan Mullally will reprise her role as the second ex-wife of Ron (Nick Offerman) in this season's ninth episode, fittingly titled "Ron and Diane," TVGuide.com has learned exclusively. Tammy will once again stir up trouble for Ron, who has only recently started a possible fling with Pawnee citizen Diane (Lucy Lawless).

Parks and Rec Video: Ron finds love with someone not named Tammy in Lucy Lawless

Beginning in Season 2, Parks started an annual tradition featuring Ron's eccentric ex-wives, beginning with "Ron and Tammy," followed by "Ron and Tammy: Part Two" in Season 3, and "Ron and Tammys" in Season 4, in which his first ex-wife Tammy (Patricia Clarkson) and his mother Tammy (Paula Pell) came to town.

Best known for playing Karen Walker on Will & Grace, Mullally, who's married to Offerman in real life, has recently appeared on Happy Endings, Party Down and Childrens Hospital.